for an Evening Curated by Jason Bentley

with Members of Pacific Symphony

Pacific Symphony’s Wavelength Festival of Music, presented by the all-new Mercedes-Benz CLA, is pleased to announce a special evening of electronic dance music at Pacific Amphitheatre on Saturday, Aug. 24. KCRW Presents an evening curated by Jason Bentley, the station’s music director and host of the signature shows “Morning Becomes Eclectic” and “Metropolis.” The event will feature a DJ set from Jason Bentley and performances by groundbreaking electronic artists Z-Trip and Bonobo alongside members of Pacific Symphony.

Pacific Symphony invited Bentley to develop an event as part of the Wavelength Festival of Music that would showcase the global electronic dance movement in an alternative setting. “I think this festival will inspire audiences and allow Pacific Symphony to be seen in a fresh light, presenting multiple musical genres,” commented Bentley. “I chose to bring Z-Trip and Bonobo into this project because their diversity as performers, artists and producers matched the collaborative and eclectic feel of this festival concept as a whole.”

Zach Sciacca, better known as Z-Trip, is hailed as the award-winning American DJ and producer that pioneered the mashup movement. In 2012 Z-Trip was featured as hip-hop legend LL Cool J’s touring DJ and collaborated with Talib Kweli on the album Attack the Block. Bonobo, also known as Simon Green, is a British musician, producer and DJ with a multifaceted and complex musical style featuring sonic backgrounds and distinctive vocals. Bonobo’s fifth album The North Borders released in spring 2013 on Ninja Tune records. Bonobo will be performing with select members of Pacific Symphony. Jason Bentley will also be performing alongside the two electronic masterminds.

Wavelength Festival of Music opens at Pacific Amphitheatre on Thursday, Aug. 22 with Bonnie Raitt* and very special guest Keb’ Mo’. Friday, Aug. 23, welcomes The Airborne Toxic Event performing with Pacific Symphony and Delta Spirit opening the show. KCRW Presents Z-Trip and Bonobo for an Evening Curated by Jason Bentley with members of Pacific Symphony follows on Saturday, Aug. 24. The festival concludes on Sunday, Aug. 25, with The Dark Side of the Moon: Pink Floyd tribute band Windborne performing the seminal album cover to cover with Pacific Symphony.

The idea for Wavelength sprang from a desire to serve the Orange County region with a new and distinct popular music experience that demonstrates the versatility of Pacific Symphony’s musicians to collaborate with a wide range of artists. Celebrating its 35th year this summer, Pacific Symphony is acclaimed nationally and internationally as one of America’s most innovative orchestras. Through a committed approach to delivering the best concert experience possible, the Symphony gives over 100 performances for over 250,000 patrons in venues throughout Orange County.

Tickets for KCRW Presents Z-Trip and Bonobo for an Evening Curated by Jason Bentley will go on sale to the public June 15 at 10 a.m. through Ticketmaster.com. Tickets will range in price from $29-$39. VIP Packages will also be available through Ticketmaster.com. Tickets and VIP Packages for Aug. 22-25 range in price from $25 to $95 and are currently on sale. For more information, visit WavelengthFestival.org and PacificSymphony.org. 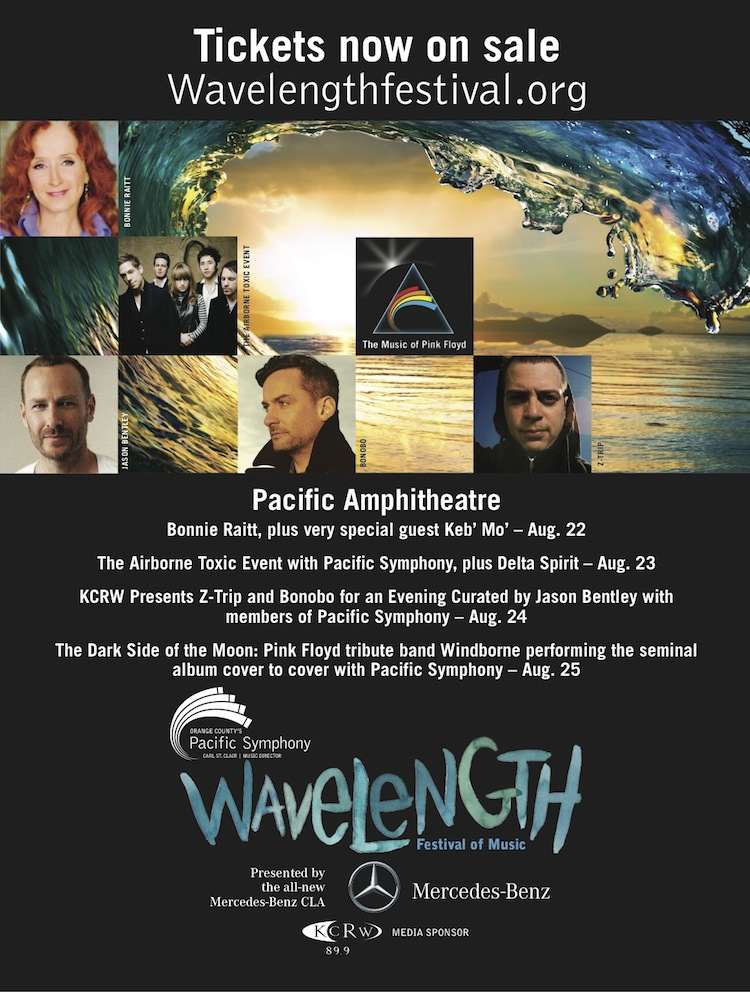