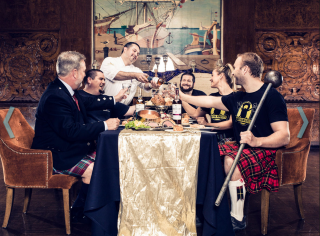 LONG BEACH, Calif., (January 17, 2017) – The Queen Mary welcomes back the celebration of true Scottish heritage with the annual ScotsFestival & International Highland Games XXIV February 18-19. The festival will kick off with the Burns Supper on February 17 followed by a full weekend of rich Scottish culture highlighted through authentic activities, athletics, dancing, entertainment and cuisine all in ode to the Queen Mary’s Scottish legacy.

Celebrate Scotland’s best-loved bard, Robert Burns, with a traditional Burns Supper on Friday, February 17 including haggis, whisky, traditional Scottish music and dancing in the Queen’s Salon aboard the World-Famous Queen Mary. Hosted by the formidable John Hannah, the supper experience includes a complimentary cocktail, the piping of the haggis, a traditional four-course dinner and all the Scottish entertainment imaginable.

Official ScotsFestival Opening Ceremonies begin the morning of February 18 with the traditional Grand Parade of Clans & Bands with an Address to the Haggis. February 18-19 from 9 a.m. – 6 p.m. daily, festivities include Border Collie sheep-herding, firing demonstrations, performances by the Scots Greys Calvary, Royal Scottish Country Dance Society, and historic re-enactments in ode to the Queen Mary’s Scottish legacy. Forty members of the US Marine Corps Pipe Band are set to perform a traditional hymn with the LA Scots Grade 1 Pipe Band, the premier pipe band in the United States.

The Rock Yer Kilt concert welcomes the best Scottish, Gaelic and Celtic bands this side of the pond with live performances at the official ScotsFestival after party on February 18. Nominated by L.A. Music Awards for “Best Tribute Band”, Bonfire, the AC/DC tribute band, is set to headline this year’s Rock Yer Kilt ScotsFestival concert. The celebration starts at 6:30 p.m. and is open to all ages.

Scotch Whisky tasting sessions with aged malt experts and craft beer samplings are available for adult ScotsFestival guests, while the wee laddies and lassies can bear witness to Queen Mary’s coronation, knighting ceremonies and even take part in the Wee Highland games.

Visit queenmary.com/scotsfestival for more details and to purchase advanced tickets to experience all the Scottish festivities and celebrations.