Center for the Art of Perfor 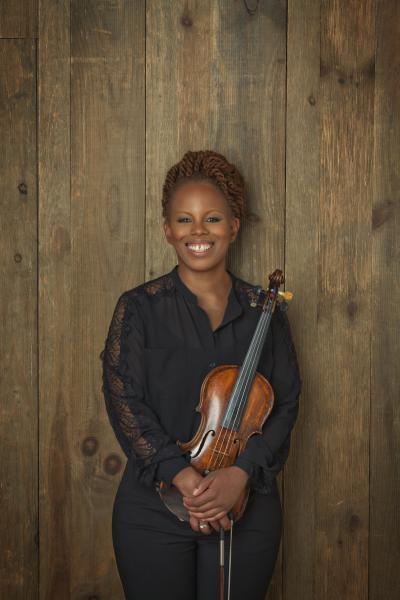 mance at UCLA is proud to present the rich stylings of jazz violinist Regina Carter, who will perform from her newest album Southern Comfort—a journey through the musical history of the South. Folk multi-instrumentalist Sam Amidon will bring the American past back to us with re-composed folk songs. Tickets ($29-$59) for Friday, February 26 at 8 p.m. are available now at cap.ucla.edu, via Ticketmaster and at the UCLACentral Ticket Office at 310.825.2101.
This performance is supported in part by the Sally & William A. Rutter Endowment for the Performing Arts, the Ginny Mancini Endowment for Vocal Performance and the Roslyn Holt Swartz & Allan J. Swartz Endowment for the Performing Arts.
Sam Amidon will also be participating in a special event for local public schools through the Design for Sharing arts education program. In this special performance for student audiences, Sam and his band will share re-imagined Appalachian folk favorites, incorporating elements of jazz, experimental and indie rock music.
ABOUT REGINA CARTER
Violinist Regina Carter is considered the foremost jazz violinist of her generation – a designation which doesn’t quite paint the picture. As a result of her curiosity, passion, and quest for beauty brought to every stop taken on her full musical journey, she was awarded a MacArthur Fellowship (a “genius grant”). Those are more apparent than ever on her latest album Southern Comfort (Sony Music Masterworks). She explores the folk tunes her paternal grandfather, a coalminer, would have heard as he toiled in Alabama – and the project expanded to include other folk tunes of the region.
Intent on making the past, present, Regina sought out distant relatives and books about the era in which her grandfather lived. From there, she went to the Library of Congress and the renowned collections of folklorists such as Alan Lomax and John Work III digging deep into their collected field recordings from Appalachia. On Southern Comfort, Regina interprets her own roots through a modern lens.
The 11 tracks on Southern Comfort include Carter’s interpretations of Cajun fiddle music, early gospel and coal miner’s work songs in addition to some more contemporary tunes.
“In the Appalachians there were Scottish and Irish descendants, slaves and Native Americans. It was a cultural hodgepodge and the music resulting from it is intoxicating. This disc was to pay homage to my family,” said Carter, “but it turned out to be so much more.”
The musicians on this recording bring a different mixture of backgrounds to the project, including guitarists Adam Rogers and Marvin Sewell, bassists Chris Lightcap and Jesse Murphy, accordionist Will Holshouser and drummer Alvester Garnett, who also provided arrangements. Stefon Harris, Xavier Davis and Nate Smith also contributed arrangements, about which Carter expressed, “Each arranger brings out something musically that’s unique to them which speaks to me.”
ABOUT SAM AMIDON
Singer/songwriter/multi-instrumentalist/artist Samuel Tear (aka Sam Amidon) began playing fiddle at the age of three. Raised by musician parents on a steady diet of Irish and Appalachian folk in Brattleboro, Vermont, Amidon spent the early arc of his teens performing and recording traditional dance and avant-folk music with his parents, as well as his own group, Assembly. He added banjo and guitar to his repertoire after relocating to New York City, where he began collaborating with longtime friend Thomas Bartlett (Doveman), as well as a host of other acts like Tall Firs, The Swell Season, and Stares. He released his debut album, Solo Fiddle, in 2003, followed in 2007 by But This Chicken Proved Falsehearted and All is Well in 2008. Amidon married singer/songwriter Beth Orton and the two had a son in 2011. Output remained strong from Amidon as he entered into family life, with new volumes arriving in the form of 2009’s duet with percussionist Aaron Siegel, Fiddle & Drum, 2010’s I See the Sign, 2013’s Bright Sunny South, and 2014’s Lily-O. In 2015, But This Chicken Proved Falsehearted was reissued in an expanded edition from Omnivore Records after years out of print.