Kick Off Your Cinco De Mayo Celebrations with Craft Beer and

[Silverado, CA] – The 3rd Annual Sabroso Craft Beer & Taco Festival will take over the picturesque Lake View Park near Irvine Lake on Saturday, April 30 from 12 to 4 p.m. The event comes courtesy of Brew Ha Ha Productions and will feature the festive combination of live music, games, contests, Sabroso’s famous Lucha Libre matches, and of course unlimited beer tastings from over 100 craft beers and incredible $3 gourmet tacos from some of OC’s best chefs and restaurants all competing for the coveted People’s Choice awards.

In addition to the taco eating and unlimited beer sampling, event-goers are sure to enjoy spirited contests, engaging attractions and the crowd favorite Lucha Libre wrestling matches. Also back by popular demand is live music from Southern California natives, The Wheeland Brothers.

Sabroso, by definition, means tasty. This festival honors the spirit of its namesake and pairs the tastiest tacos with the finest craft beers.

A portion of the proceeds will benefit the Big Brothers Big Sisters of Orange County and Inland Empire.  As one of the top mentoring organizations in the country, they have changed the lives of thousands of local children each year since 1958. For more information, visit https://www.ocbigs.org/.

Festival tickets are $55 online in advance. If the event does not sell out prior, tickets will be available at the door day of the event for $65. Designated Driver tickets will be available for $20 at the door only and must be accompanied by a paid ticket holder. No one will be admitted who is under 21 years of age.  Tickets for Sabroso Craft Beer & Taco Festival are now on-sale at http://www.sabrosotacofest.com/. 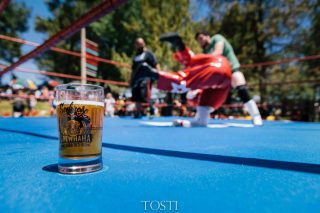