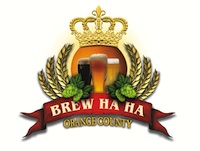 On Saturday, September 8th the 3rd Annual OC Brew Ha Ha craft beer festival took over the beautiful Oak Canyon Private Park in Silverado near Irvine Lake. In memory of those firefighters lost in the 9/11 tragedy, over 75 award-winning breweries poured over 175 craft and import beers in support of the Orange County Fallen Firefighters Relief Fund. Thousands of dollars were raised in support of the commemorative organization.

60 off duty firefighters donated their time to pour beer for various breweries. Over 3,000 craft beer fans attended the festival and the event drew more craft beer experts and industry VIP’s than ever before.

The day opened with the world-renowned Cicerone and craft beer ambassador for Stone Brewing Company, “Dr. Bill” Sysak, welcoming the VIP crowd, sharing a taste, and delivering a few words about the current state of the craft beer industry. Then it was time to let the tastings begin! Beer and foodie experts including Jarred Dooley of The Playground, Jon Porter of Smog City Brewing and Ed Heethuis of Ritual Brewing hosted seminars throughout the day. The 2012 OC Brew Ha Ha People’s Choice Award went to Bootleggers Brewery for the second year in a row.