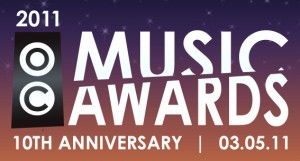 The 10th Anniversary OC Music Awards season kicks off on January 4, 2011 launching 7 weeks of free showcases at different venues across the county. 35 local artists will compete for the titles of Best Live Band or Best Live Acoustic and a performance slot at the 2011 OC Music Awards on March 5 at the Grove of Anaheim.

Over 500 artists submitted to the 2011 Showcase Series through OC Music Awards’ website and online at Reverbnation.com. It is always free to submit, participate and attend the Showcases Series, with objective to provide further opportunities and exposure for local musicians within their own music community.

The 2011 Showcase Series launches at Detroit Bar on January 4 and continues every Tuesday night through February 15 with stops at The District at Tustin Legacy, The Gypsy Lounge, The LAB, Tiki Bar, The Gypsy Den of Santa Ana and The Slidebar. Five Showcase Series finalists in each live category will then move on to the Showcase Series Finals. Best Live Acoustic Finals will take place at Fullerton Museum on Thursday, February 24 and the Best Live Band Finals at The Galaxy on Friday, February 25. The first OC Music Awards took place at The Galaxy in 2001 and a return to the venue for the 10th anniversary Best Live Band Finals is an extended homage to the event’s local heritage.

At the Best Live Acoustic Finals at Fullerton Museum on February 24, OC Music Awards will also open its annual Listening Wall exhibit in the Leo Fender Gallery. Similar to the 2010 exhibit presented at Laguna Art Museum, the 2011 iteration will feature 12 iPod listening stations representing 25 Awards categories with a song from each nominated artist. The Awards Listening Wall exhibit will remain on display at the museum through May 8, 2011.

Additionally, OC Music Awards is pleased to introduce two new submission based Academy nominated categories to the event with Best Youth and Best Music Video. The Best Youth category requires the majority of band members or the solo artist be under the age of 16. Best Music Video considers videos produced in 2010. Submissions for both categories are free and open to the public on OC Music Awards website through December 31.

The 2011 OC Music Awards Schedule and Showcase Series lineup follows. We look forward to seeing you at the shows!

Brothers of the Castle (Santa Ana)

We Are the Arsenal (Costa Mesa)