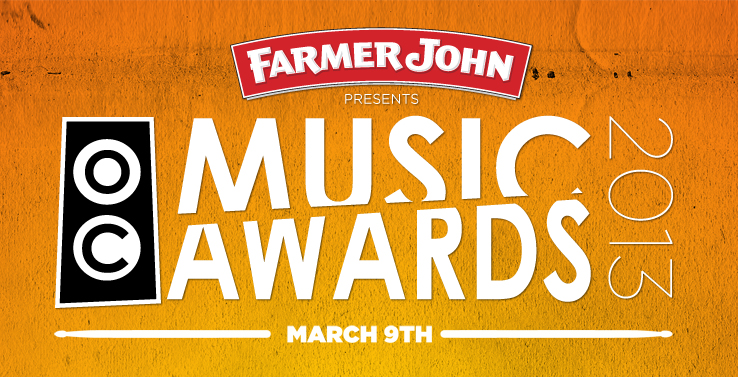 Hundreds of artists submitted online at ocmusicawards.com to participate in the 2013 Showcase Series and 35 talented artists were selected to compete. It is always free to submit, participate and attend the OC Music Awards Showcases Series, supporting the event mission of providing further opportunities and exposure for local musicians within their own music community.

A panel of judges that included music industry professionals Joyce Mealey of Fearless Records, Nathan Jackson of OC Weekly, Nadia Betkouchar of CBS Radio, and Tazy Phyllypz of Ska Parade scored each Showcase artist’s performance. The judges scored on musicianship, originality, song composition, stage presence, audience participation and attendance.  The public was able to visit ocmusicawards.com and cast their FAN VOTE to automatically send one Showcase Series artist on to the Finals regardless of the judges’ scores.

Each of the five Showcase Series finalists will receive an Ernie Ball Tour Pack filled with strings and accessories. The winner of the Best Live Band category will receive a four-day recording session at Red Bull Studios, $1,000 gift certificate from Guitar Center, an Ernie Ball Full Endorsement, custom Music Man instruments for each string player in the band, a slot on one Southern California date of the 2013 Vans Warped Tour, a year of free Wahoo’s Fish Tacos and popchips, the category title of Best Live Band and a performance slot at the 2013 OC Music Awards celebration Saturday, March 9 at City National Grove of Anaheim.

We are pleased to announce the five finalists in the Best Live Band Showcase Series are Nilu, Robert Jon & the Wreck, Fiction Reform, Jeramiah Red and Fan Vote winner Solution. These five bands will perform at the House of Blues Anaheim Showcase Series Finals where the category winner will be announced on stage at the end of the night.

The online voting for the People’s Choice Award category closed on Saturday, February 16 at midnight. Thousands of votes were cast to determine the five nominees. The 2013 People’s Choice nominees are No Doubt, Suburban Legends, The Devious Means, The O.C. Supertones and Whiplash X Band. The winner of the category will be determined via text voting at the March 9 Awards celebration at City National Grove of Anaheim.

Media: Please note no video coverage will be allowed at the February 26 Finals. Photo coverage requests must be submitted Ashley@theaceagency.com by Friday, February 22 at 5PM for access.

Celebrating its 12th year, OC Music Awards is Orange County’s premiere annual music event acknowledging the best in local talent and providing opportunities to further the success of our musicians and the OC music scene. http://ocmusicawards.com