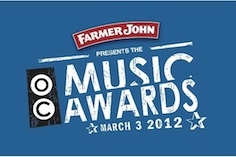 2012 Orange County Impact Award Recipient – Thrice
Thrice has been a staple in the alternative-modern-rock world for nearly ten years and is known for effortlessly and continuously releasing groundbreaking records. From First Impressions to Major/Minor Thrice has remained true to their artistic expression, as early pioneers of a new hardcore genre to one of the most progressive bands with an ever-evolving sound. OC Music Awards is proud to honor local heroes, Thrice, with the 2012 Orange County Impact Award.

2012 Lifetime Achievement Recipient – Rodney on the ROQ
Rodney Bingenheimer is a force in the radio industry and pioneer in first identifying and having the courage to believe in new artists that later go on to major success, many of which have come from Orange County. Recognizing the unforgettable contribution to the musicians and the music community of Orange County and beyond, OC Music Awards is pleased to honor KROQ’S Rodney on the ROQ for his notable impact on local music, with the 2012 Lifetime Achievement Award.