Presented by the All-New Mercedes-Benz CLA

At Pacific Amphitheatre at the OC Fair & Event Center 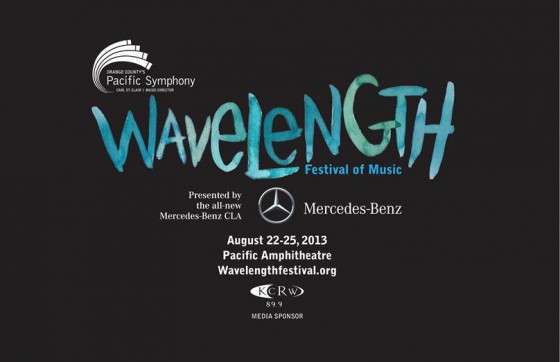 As part of its 35th Anniversary Season initiatives, Pacific Symphony announced today the launch of a new musical endeavor, Wavelength Festival of Music, to be held this summer at the OC Fair & Event Center at Pacific Amphitheatre in Costa Mesa on Aug. 22, 23, 24 and 25. Over four summer evenings, Wavelength features a dazzling and diverse array of contemporary musicians, in most cases performing with members of Pacific Symphony.

Having recently been named to a Lifetime Achievement honor at the 2013 OC Music Awards, Music Director Carl St.Clair is no stranger to the importance of popular music and its connection to the Symphony.

“Pop music has a long history of linking up with classical musicians. From The Beatles to Motown to contemporary indie bands, artists have recognized the sonic power unique to an orchestra. Our goal with Wavelength is to present diverse genres of high-quality music, often in direct collaboration with musicians from the orchestra,” said Music Director Carl St.Clair. “I hope audiences will spend the entire weekend with us to open their ears to worlds previously unknown to them. I like the diversity of the offerings, which I hope will be the ongoing appeal of Wavelength over the years.”

The iconic Bonnie Raitt* opens the festival Thursday evening, Aug. 22. More than just a best-selling artist, respected guitarist, expressive singer and accomplished songwriter, Bonnie Raitt has become an institution in American music. Bonnie Raitt started anew with the release of her 19th album, “Slipstream” in 2012. The album marked her return to studio recording after seven years and the launch of her label, Redwing Records. A huge success, “Slipstream” sold over a quarter-million copies in 2012, making it one of the top-selling independent albums, and earned Raitt her 10th GRAMMY® Award to date.

Dubbed “indie night,” Friday, Aug. 23 opens with Delta Spirit and then heats up with The Airborne Toxic Event performing with Pacific Symphony. The Airborne Toxic Event is a Los Angeles based indie band best known for its blend of rock music and orchestral arrangements, having performed often with the LA-based Calder Quartet and various orchestras across the U.S. The band released their anticipated third studio album “Such Hot Blood” on April 30, 2013.

On Saturday, Aug. 24, the festival’s media sponsor, KCRW, presents an evening curated by Jason Bentley, the station’s music director and host of their signature weekday show “Morning Becomes Eclectic” and “Metropolis” on Saturday nights. The evening will feature a special DJ set by Jason Bentley and special guest artists to be announced in the coming days.

Pacific Symphony enlisted Bentley to create a show that would bring today’s global electronic dance movement to the forefront. “When Pacific Symphony approached me about the festival in general and my curating the evening, I was immediately intrigued by the opportunity. I understood the Symphony’s goals for the festival and wanted to be a part of it, especially in its inaugural year,” Bentley said. “I think this festival will inspire audiences and allow Pacific Symphony to be seen in a new light, valuing and presenting all forms of music.”

The final concert of the weekend on Aug. 25 presents The Music of Pink Floyd – “The Dark Side of the Moon” played in its entirety with Pacific Symphony in celebration of the album’s 40th anniversary. Bridging the gap between rock n’ roll and classical music, conductor and arranger Brent Havens, lead vocalist Randy Jackson and their full rock ensemble capture the essence of Pink Floyd’s ethereal harmonies while adding new musical colors in a symphonic rock hybrid like never experienced before.

“The idea for Wavelength sprang from a desire to serve Orange County and the region with a new and distinct popular music experience which demonstrates the versatility of the musicians to collaborate with a wide range of artists,” said John Forsyte, president of Pacific Symphony. “Through a long-standing relationship with Steve Beazley, former CEO of the Fair, I have come to learn about the exciting developments at the OC Fair and Pacific Amphitheatre.  It’s a great venue for live music. Over a million people attend the OC Fair every summer and many attend popular music concerts at the Amphitheatre. Steve and I saw a great opportunity for Pacific Symphony’s name to get in front of a wider audience base.”

“We welcome the Southern California Mercedes-Benz dealers as the festival’s presenting sponsor,” continues Forsyte. “Their sponsorship assures us that during this critical first year we can concentrate on delivering the best experience.

“Our relationship with the OC Fair too is key to the success of this major new initiative. The Fair administration and board has been very generous in providing resources and has been quick to identify ways to produce the project efficiently. The orchestra has performed numerous times at Pacific Amphitheatre, so we’re confident that all expectations will be met — from superlative acoustics to all aspects of patron comfort.”

“Wavelength celebrates music at its best, an art form without boundaries,” said Executive Producer Steve Beazley. “Blending orchestral and contemporary music is Wavelength’s approach and one which I believe will change the landscape of music in Orange County and Southern California.”

*Ms. Raitt does not appear with Pacific Symphony