“Santa Ana Sites: wild Up in the Santora” Presents an Immersive Concert Experience

“Santa Ana Sites: wild Up in The Santora”
Offers A Music Collective With Style

[Santa Ana, CA.] –  Santa Ana Sites: wild Up in The Santora fuses classical instruments with contemporary sounds to create an unforgettable evening in one of Santa Ana’s most charming venues. Los Angeles based music collective wild Up, musicians from The Colburn Conservatory of Music and composer/vocalist Lisa Bielawa come together on Saturday, February 22 to share in a night of unexpected artistic ventures.

With the momentum of three successful Sites programs pushing them forward, Grand Central Art Center and Santa Ana Sites’ Co-Founder/Artistic Director Allen Moon serve up their newest vision showcasing the youthful side of culture. wild Up is a modern music collective that embraces sound as a vehicle for shared experiences. The Los Angeles Times praised the group stating, “You’d be forgiven for mistaking wild Up for an indie rock band.” Led by acclaimed conductor Christopher Rountree, members of the group along with some of Colburn’s musicians and soprano Bielawa will disperse throughout The Santora building to perform engaging micro concerts.

Audiences will begin their Santa Ana Sites journey at the Grand Central Art Center for a pre-show, move to the Santora’s atrium for their first encounter with the musicians, and head to the top floor where the performers and audiences will begin an adventure of music and architecture in various galleries, studios, and empty spaces. The music draws from a vast array of genres, with compositions from Bach, Ravel, Machaut, The Magnetic Fields, Katy Perry, Sun Ra, Brian Eno, The Beach Boys, The Dog Faced Hermans, Philip Glass, Lisa Bielawa, Ornette Coleman, Deerhoof and The Misfits, amongst others. Composer/vocalist Bielawa’s performance  with the ensemble treats Southern Californians to her first performance since her appearance in the LA Opera’s presentation of Philip Glass’ Einstein on the Beach, where she also served as the production’s Choral Master.

The historic Santora building’s Spanish Colonial Revival architecture sets the tone for an adventurous evening of music and mingling. A recent change in ownership has lead to a rejuvenation for the landmark venue, which broke ground in the late twenties and catered to classic Hollywood celebrities including Jack Benny, Milton Berle, and Lucille Ball. Santa Ana Sites: wild Up in The Santora will illuminate the architectural centerpiece of Downtown Santa Ana with sound and creative energy once again, an ideal way to pay homage to the building’s rich history while celebrating contemporary culture in the vibrant downtown.

Santa Ana Sites provides contemporary performances in spaces throughout Santa Ana. The traveling forum is designed to introduce the community to artistic experiences while encouraging diverse environments. Past events featured David Harrington, founder and Artistic Director of the Kronos Quartet; Backhausdance performing their dance installation, The Elasticity of the Almost; and a performance from Inner Mongolian music group AnDa Union. The Santora installment of Santa AnaSites unites music lovers of every age and background for an evening of forward thinking entertainment.

More information on the previous events can be found on the Santa Ana Sites Facebook page:https://www.facebook.com/santaanasites.

This event is anticipated to reach maximum capacity with reservations required.  The public is invited to reserve FREE tickets through email with name and requested number of tickets with a maximum of two tickets per guest to grandcentral@fullerton.edu

A reception at Grand Central Art Center will begin at 7pm. Guests are asked to arrive no later than 7:30pm on Saturday, February 22nd. 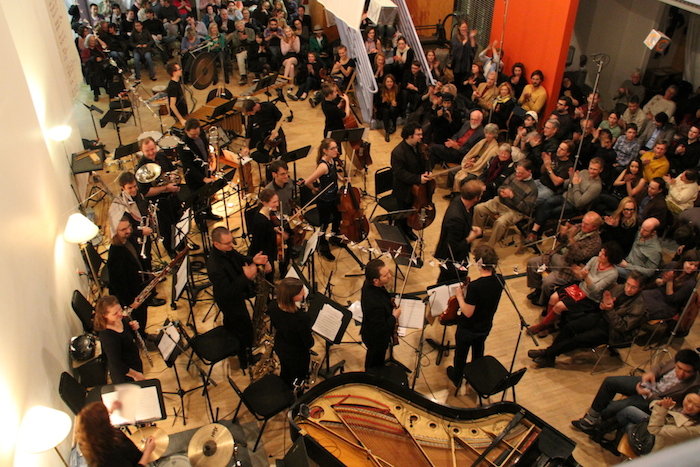 California State University, Fullerton Grand Central Art Center is dedicated to the investigation and promotion of contemporary art and visual culture: regionally, nationally, and internationally through unique collaborations among artists, students, and the community.