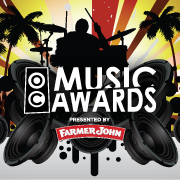 OC Music Awards is pleased to announce the 2014 main Awards celebration will take place at the City National Grove of Anaheim on Saturday, March 8. The 2014 OC Music Awards season will kick off with the Awards annual Showcase Series beginning on Tuesday, January 7. The season will continue with seven Showcases at different venues across the county leading up to the Showcase Series Finals.

Visit OC Music Awards online and check out the new 2014 look and feel. Stay connected with us on social for the latest in local music news and events.

OC Music Awards is Orange County’s premiere annual music event acknowledging the best in local talent and providing opportunities to further the success of our musicians and the OC music scene.