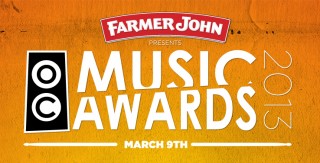 OC Music Awards is pleased to announce that the 2013 main Awards celebration will take place at the City National Grove of Anaheim on Saturday, March 9. The 2013 OC Music Awards season, presented by Farmer John, will kick off with the Awards annual Showcase Series on Tuesday, January 8 at Detroit Bar.  The season will continue with seven Showcases at different venues across the county leading up to the Showcase Series Finals.

Visit OC Music Awards online and stay connected with us on social for the latest in local music news and events.

OC Music Awards is Orange County’s premiere annual music event acknowledging the best in local talent and providing opportunities to further the success of our musicians and the OC music scene.

Farmer John, a wholly owned subsidiary of Hormel Foods Corporation (NYSE: HRL), is headquartered in Los Angeles. Farmer John produces more than 1,200 items for the retail and foodservice channels in the western United States. Offering an array of fresh and value-added protein products, the FARMER JOHN® Brand holds leadership positions in many categories. The company employs more than 1,700 people in Southern California. For additional information, visit www.farmerjohn.com and www.facebook.com/farmerjohn.