West Coast BBQ Classic Returns to The Queen Mary May 14

The fifth-annual WCBC spotlights grill masters from around the country as they compete for the title of West Coast’s BEST BBQ. 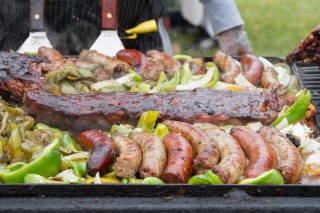 [Long Beach, Calif.] – The Queen Mary welcomes back the 5th annual West Coast BBQ Classic (WCBC) for a finger lickin’ afternoon full of barbeque grillin’ on Saturday, May 14 from 11 a.m. to 6 p.m. The WCBC invites barbeque experts and amateur grill masters to take part in a classic showdown that will leave your taste buds filled with the unmistakable sweet ‘n smoky flavors of BBQ.

The WCBC will feature BBQ styles from across the country including slow-cooked hickory barbeque from Texas and southern Memphis-style barbeque. The competition is an official California-State-Certified, KCBS-Sanctioned, BBQ Championship and will bring Southern California’s most accomplished Champion Pitmasters together to compete for a $10,500 cash prize and the coveted title of West Coast BBQ Pitmaster Champion.

Whether you are a barbecue aficionado or simply a foodie fan, the West Coast BBQ Classic offers something for everyone with delicious BBQ samples for only $2 each, live music, backyard games, contests and a merchant market. Live entertainment will be provided by the country sensation, Scotty Mac Band. Join in the fun and participate in the watermelon or cobbler eating contests. Children are invited to Kids Country offering games, a bounce house, face painters and potato sack races just for little BBQ fans.