With Pre-Concert Lecture by Brian Lauritzen 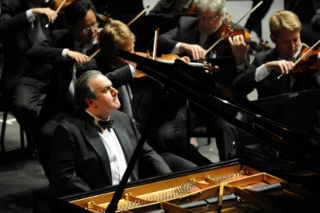 ORANGE, Calif. – Musco Center for the Arts at Chapman University and the Philharmonic Society of Orange County present Yefim Bronfman in recital on February 15 at 8pm. KUSC’s Brian Lauritzen will speak at the pre-concert lecture at 7pm.

One of today’s most engaging pianists, multi-GRAMMY Award-winner Yefim Bronfman captivates international audiences with his commanding technique, power, and exceptional lyrical gifts. He stands among a handful of artists regularly sought out by festivals, orchestras, conductors, and recital series in North America, Europe, and Asia.

Bronfman was born in Tashkent, Uzbekistan, in the former Soviet Union and emigrated to Israel at the age of 15. He became an American citizen in 1989 and won the Avery Fisher Prize, one the of highest honors given to American instrumentalists, in 1991.

Classical KUSC host Brian Lauritzen is one of Southern California’s most sought-after speakers about classical music. Brian hosts series at the LA Phil and Salastina Music Society, and makes regular appearances with the Los Angeles Opera, Philharmonic Society of Orange County and Wallis Anneberg Center for the Performing Arts. At KUSC, he hosts the choral music program “Soul Music” and is a multi-award-winning host of “Arts Alive.”

Tickets for Feb. 15 are on sale now for $25-55 and may be purchased through the Musco Center online at www.muscocenter.org or by calling the box office at 844-OC-MUSCO (844-626-8726). Tickets are also available for purchase through the Philharmonic Society online at www.philharmonicsociety.org or by calling the box office at 949-553-2422. All print-at-home tickets include a no-cost parking pass. Musco Center for the Arts is located on the campus of Chapman University at 415 North Glassell, Orange, Calif.